folder Filed in Blockchain, Identity, Security, Unitychain Tweet Share Read later
The Future is a Safe And Dark Web. This Is What It Will Look Like:
Unitychain Core Team comment 0 Comments access_time 10 min read

This article first appeared on Nesta.org.uk as one of the top finalists in The Decentralised Future Prize essay competition.

“Mass surveillance by governments and corporations will become normal and expected this decade and people will increasingly turn to new products and services to protect themselves from surveillance. The biggest consumer technology successes of this decade will be in the area of privacy.”

Already, the physical world is being tracked by cameras, mobile, and IoT devices at high density. With the recent Covid-19 outbreak, this is only going to accelerate as contact-tracing may become accepted as one of the viable ways to keep the virus abated. As a consequence, in the next 5 years, most major cities of the world will be fully surveillanced in the physical realm, and this will be instigated and sold to the public as a necessary means to protect the population from terrorists, pandemics, and more. Humankind will yearn for privacy as the powers-that-be inevitably overutilize their privilege. Naturally, we the public at large will seek refuge in an “end-to-end-encrypt everything way” and the Internet will go “dark,” as Vitalik so starkly put it, in our attempt to resist the prying eye of corporations and government-run ISPs.

The internet going dark (in the end-to-end-encrypt-everything way) while the physical world goes transparent to an unprecedented extent and there’s nothing we can do about it *already is* the compromise. https://t.co/KjyojYWdbP

The solution to an overbearing governing authority indeed resides with leveraged cryptography in order to preserve some semblance of privacy. However, on this “dark internet” where everything is encrypted and we communicate with each other on a purely need-to-know basis, how are we to coordinate and exchange value?

Just like Satoshi Nakamoto suggested in his groundbreaking white paper, the randomization of public key usage as a security measure will become more of the norm. On the dark internet we will hide in plain sight through multiple different decentralized Identities (DIDs). We will use Zero-Knowledge attestations to prove we are who we say we are and that we have the correct rights to access or participate in certain private online community activities, which will be restricted by our various Verifiable Credentials or by the Non-Fungible Tokens (NFTs) we can prove to posses.

Universal Reputation Scores tied to decentralized identities will be used as a basis for facilitating trade and even issuing credit and access to assets, facilities, resources, and more — without transacting parties having to necessarily expose their personally identifiable information (PII). Data breaches will be limited as a result, since even if one’s data somehow becomes exposed, in the “dark internet” everything remains encrypted anyway – so there is nothing even worth stealing in the first place, except of course for illegible ciphertext.

You may be thinking: “This is all well and good, however, where will one actually hold all of this digital collateral to facilitate a privacy-preserving Internet? A third-party provider?”

The answer is no.

In the next 5-7 years, it will be commonplace that each of us has our little private piece of the cloud totally and wholly owned by us, fortified by quantum-resistant encryption schemes so strong that neither the infrastructure providers we decide to host with nor the cyber-security arms of our global militaries will be able to fully ascertain our online activities or invade our privacy.

The Encrypted Internet will be used to manage some of the most important aspects of our lives, automating otherwise incredibly complex systems in the cloud directly unbeknownst to the physical layer of everyday reality. Our data will be fortified, fully owned and blockchain verified in such a way that transaction fluidity is fully engendered and maximized — with blockchain as the trust layer, we can commerce with each other without fear. In that world, we don’t need to know your name in order to be of service to you, and you don’t need to know ours.

The Next Internet is an amalgam of the existing internet and a global p2p structure that spans all corners of the earth and will be composed of millions of individuals running their own private cloud instances and physical hardware-stacks as home appliances. Following specific mathematical and computer science protocols, these countless individuals will contribute their independent or leased hardware resources to provide lookup, routing, storage, consensus, security, and computing services for the various causes and networks they support and believe in.

With this upcoming fully encrypted end-to-end Internet, we will manage our owned digital assets and our owned data through our owned private-portals in the cloud. The software that powers this private-portal is what we like to call a “Value Management System” or “VMS” for short. We hypothesize in the near future it will become a human right to own and have access to a VMS, as sure as it is a human right to own one’s identity and to have access to financial services. Once an individual has an owned decentralized identity, as a natural corollary, he or she will also immediately have access to banking through decentralized financial systems through cyber-currencies. One’s VMS will be the operating interface individuals use to manage their digital identity, assets, personal data, and even their own node’s analytics.

Sir Tim Berners-Lee, the inventor of the World Wide Web, is currently working on such a VMS platform developed in collaboration with MIT, called Solid (“Social Linked Data”). Solid PODs are your personal storage space. PODs can be described as your “secure USB sticks for the web.” There is a focus on personal data ownership and the benefits of structured data for interoperability among third-party applications – instead of giving your data to corporations and having the data siloed with them, third-party applications integrate your POD into their system, while only you can control what others can see.

Here is a mockup of the User Interface for a Solid POD prototype: 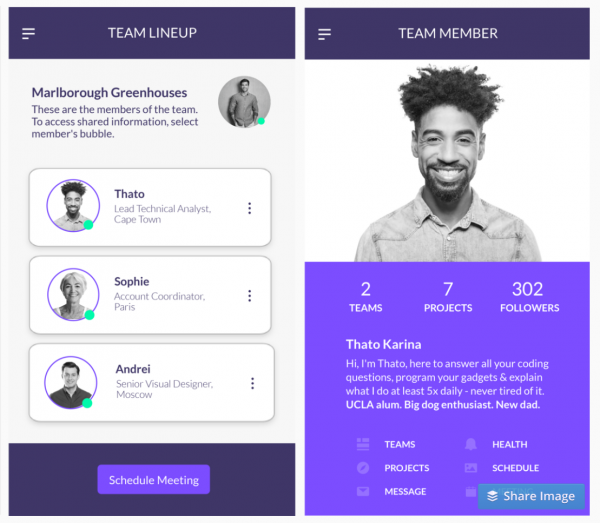 Next, we’d like to introduce Urbit, which is a movement seeded in San Francisco seeking to build a decentralized peer-to-peer network of personal servers. Their core tenants revolve around Identity management and P2P federated networking forming an alternative internetting infrastructure. One of their stated goals is “to leave behind a world of apps and services for one where we can bring everything together in one place. And, in doing so, ordinary users can create customized digital environments for their friends and communities.” Likewise, they are building their own interfaces and system architectures for the decentralized web.

Here is a User Experience Interface for Urbit OS1:

Solid and Urbit are projects paving the way on how the next internet and computing paradigms are shifting from a client-server model to a wholly end-to-end P2P networking model. Through identity management and secure data storage, one can connect his or her owned “personal server” or “private POD” into digital ecosystems to engage with applications privately and with permission, and only as deeply as necessary to achieve the desired results, and not more.

One of Unitychain’s core P2P products is also a Value Management System. Imagine a server you control that exists redundantly and securely on multiple cloud infrastructures that only takes a few minutes to setup and automatically encrypts all your personal data. This aptly describes the VMS we are building to help the multitudes navigate the safe, dark, encrypted internet.

With emerging VMS designs like ours, you can choose a network you would like to provide your compute and storage resources to and receive full analytics on your node’s performance, while you also can intuitively manage your earned and owned Digital Assets. The following are some mockups of our platform, which is currently in development and should be publicly available in Q2 of 2021.

Manage Your Node Analytics
Choose a network you would like to dedicate your compute and storage resources towards and see your node’s analytics and performance earnings: 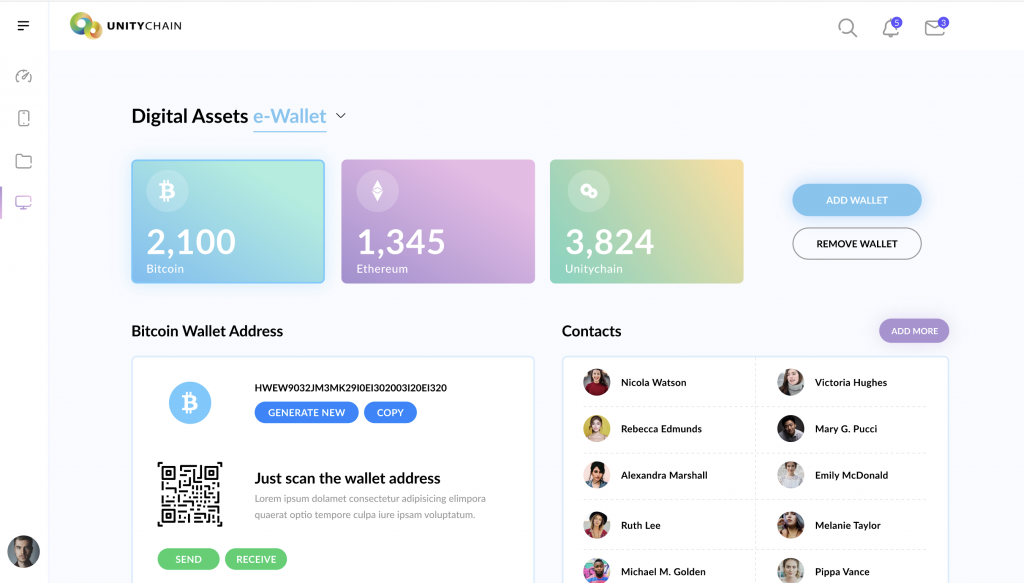 Imagine being able to book a Telemedicine doctor appointment directly through your VMS and paying for the doctor’s consultation with the Digital Assets you earned by contributing your compute and storage resources to secure blockchain networks. Moreover, consider an in-built access control mechanism to decrypt or revoke access to your Electronic Medical Records through, for example, NuCypher, that you safely host in the cloud at your full control, always a few clicks away in case of need. This is the world we are asking you to accept and envision, as it is merely the tip of the iceberg of where we believe the future is inevitably headed. This is the general direction all of the aforementioned projects are aiming to bring into existence, before a total clamp down of both our physical and Internet realities.

In the near future, we postulate that private citizens will run their own nodes, whether on the cloud or their personally managed hardware stack, and communicate P2P with each other without centralized intermediaries. User data will be highly protected through military-grade encryption and randomized pubic keys and browser fingerprints to provide greater privacy guarantees from prying eyes. Smart contracts will automatically handle a lot of functionalities under the hood providing individuals empowerment, privacy, and dignity — while our physical lives become more fully monitored and tracked.

With self-sovereign identity, leveraged cryptography, and decentralized blockchain and storage infrastructures, the future of the web will be both safer and darker (end-to-end encrypted) than ever before. This is the future we are building towards and this is where the future of the web must head for the sake of preservation of liberty.

In the meantime, let’s stay in touch.
Join Our Growing Community